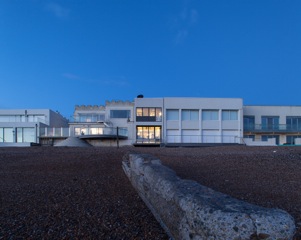 The site was impossible. A sliver of land where the garage stood. We were advised by the agent to put it in for sale with the house. But while one can leave a house that is no longer loved, one cannot leave a site that is: a site on the brink of the sea where pebbles are tossed onto the porch and the waves threaten to seep under the door.

The old house was big and quirky, but it had begun to stray far out of the control of builders, cleaners and, especially, its inhabitants. We wanted a house that was ours entirely, that wouldn’t be over-bearing or hard to handle; that would be gentle, amenable and interesting.

We looked at the garage. Built up against the sea wall, it sat on a piece of land approximately 4.7m by 10 m long. Would it be a straightjacket or would the discipline of the site create work of depth, intricacy and invention when a wider space would produce profligacy and confusion.

A terrace of concrete and steel houses built in 1910 – they don’t look Edwardian, they look, or looked because they have changed many times since then, strange. Then, they had flat, castellated rooves; a large terrace overlooking sea with a wooden canopy; a rear terrace and, for each, a small greenhouse. The villas were built for rent by professionals returning from the colonies; they would be comfortable, within reach of London and able to recover in the fresh sea air before finding a new job and a more permanent home.

So – a small space and an ignorant owner. The first necessity was an architect; the RIBA supplied me with a list of six to fit the criteria:

Sanei Hopkins won the commission. They fitted the criteria but, in the end, and given the exigencies of the brief, it was their enthusiasm that appealed; that and feeling they would allow me to be part of the project.

Though we hadn’t realised this in advance, we found there was a shared aesthetic. Thus the making of the house as an expression of my love of art and the visual world was not only possible but a delight. 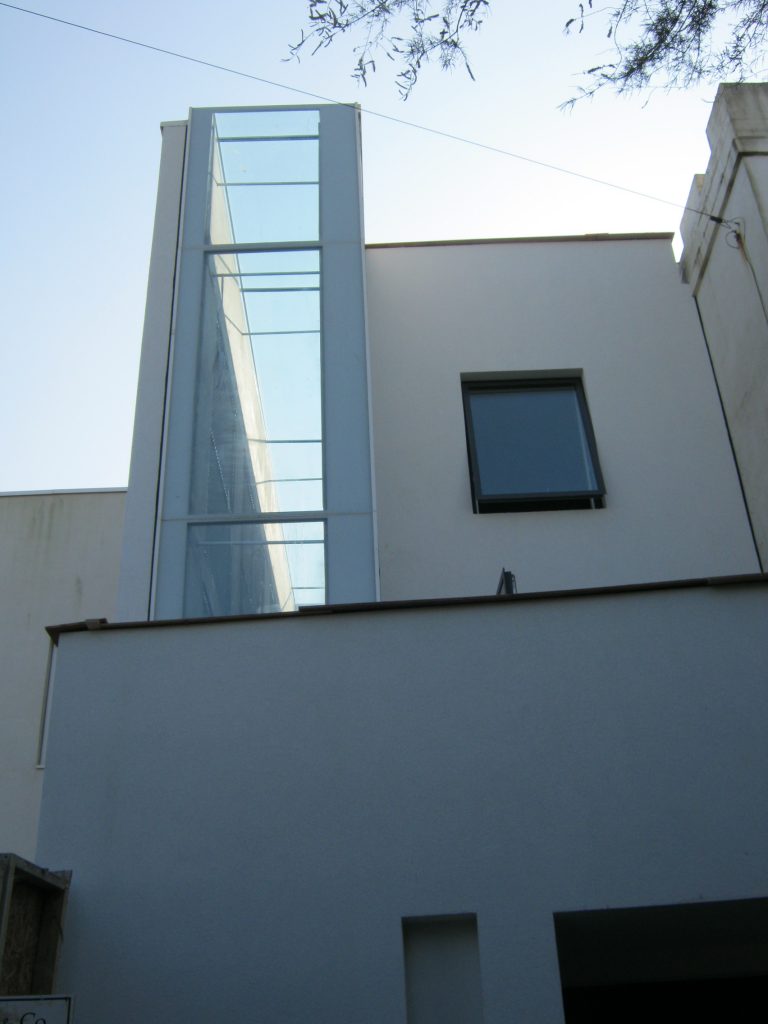 The brief was haphazard and unprofessional; a house that made the very most of the site; one that, despite the elongated shape and where only the narrow walls could have windows, would be light; one that, as far as possible, made a companion of the sea, not an enemy. Also, there was my art collection to be housed somehow – every inch of wall a picture, every inch of floor a sculpture, but still a house, not a museum or a gallery.

It was an unfamiliar way of working. I had converted many old houses to suit a growing and then shrinking family but had never built; never escaped the necessity of compromise with existing structures, never been able to do more than try to bend existing space to fit them, never living anywhere designed for our sort of living.

I had to work in a new way: a builder takes instruction – an architect doesn’t. So, bit by bit I learned what our relationship was and how it functioned. The frustrated architect, faced with a list of wants and how to get them, would reply patiently. ‘We make a proposal, you comment on it.’ And so began the long process of to-ing and fro-ing – proposal, comment, new proposal, further comment, but, once adjusted to, this is the best way. It was like an old-fashioned courtship; I learned to read the intentions of others, to make my own mind work to the same end.

Another new experience was choosing a builder. The architects understand the capacity of the builder to realise the building, while I went on instinct. Here, the architects’ instinct chimed with mine. We both preferred the same man. Personal chemistry is a strange but essential ingredient in a partnership. ‘An old hippie’ the architect had commented, ‘I can work with him.’ I, being an old hippie myself, agreed.

There were more problems to come of a size in inverse proportion to that of the house I wanted to build. We were on a flood plain; luckily the engineer’s visit chimed with calm weather and low tide. The site was on a narrow private road, giving little room for heavy machinery and residents had regularly to be warned to move their cars or they would be stuck for the duration. There were skirmishes over the party walls; people and principles at odds. But the end result was worth the battle.

Looking back, it was all for the best. The delays, though taxing the heart and soul, as well as expensive, made time for ideas to mature; had everything gone smoothly the building might have been less well-considered and less successful. In the event, the beauty and usefulness of the house was born of hard choices, unconventional solutions and the joy of finding what it is one really wants.

Approach a building from the outside and what can you assume of its interior? Though there is a glass panel running down this elevation through which the sky is visible, it is not possible to see the sea from here. The front door is also hidden behind a screening wall.

Outside, the house is small, neat and opaque. Inside, there is light, modest scale and fine detailing. But the scale is variable. The modest shoebox-shaped building has space; rooms, passages, secret cupboards. There is darkness as well as light.

The house’s skeleton can be seen and read. In the stairwell the cruciform shape of the concrete verticals and cross-beams. The frame is reinforced with steel and underlines the house’s context; that it stands on a shifting shingle beach.

The sea is omnipresent, inside and out. On the Ground Floor the living room projects into the waves at high tide like a boat. Mirrors on the sheltered porch reflect the horizon endlessly so one is wrapped about by silky blue or tossing green. On the First Floor the views are to the South and the Chanel; to the North, the port. When you reach the roof, you step onto shingle, a beach in the sky where the sea and the South Downs form the horizons.

The entrance floor is different; half below ground level, it has no view, though the sea may lap against the bedroom window. Here the areas of darkness create mystery and point up the power of the light that falls through the pierced stairs, or springs from kinetic sculptures or floods in rainbows across the floor. 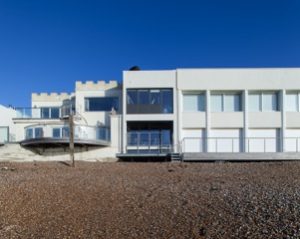 The Narrow House is petite; it has a delicacy and refinement of shapes and finishes; but it is also strong; the doors are tall, framed in steel like bulkheads. The concrete frame is hard and smooth though the texture has interesting aberrations like the flaws in a Persian carpet; there are pencilled calculations and doodles, traces of the builders who made it.

The Narrow House is elegant but without pretension; like a beautiful woman it has good bone-structure; it will age gracefully.