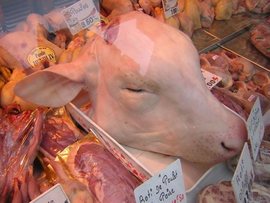 ‘Calf’s head is quite a dish among some epicures; and everyone knows that some young bucks among the epicures, by continually dining upon calves’ brains, by and by get to have little brains of their own, so as to be able to tell a calf’s head from their own heads; which, indeed, requires uncommon discrimination. And that is the reason why a young buck with an intelligent-looking calf’s head before him, is somehow one of the saddest sights you can see. The head looks a sort of reproachfully at him, with an ‘Et tu Brute!’ expression.’