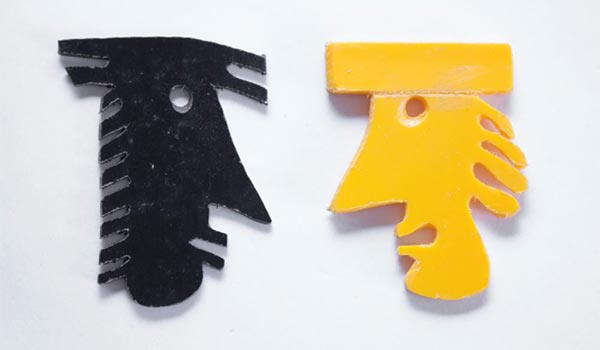 There is a positive side to obsession. Sometimes many are not too much and repetition is in the act of making, not in the work made. These objects may just be faces in a crowd but within their mass, their similarities and their differences, something wholly new is formed. Each is an individual; this is a population of inanimate objects galvanized into life by a man who made sure they were not seen till after his death.

Freidrich Nagler came from Vienna; a city of ornate buildings crammed with people from all over Europe. His family and friends all died in the holocaust but he escaped. He was interned, deported and interned again. This life of upheaval and rejection ended peacefully in marriage and a small town in Hampshire.

Nagler was living in an open landscape of hills and meadows. In the garden he had a hut; small, but not a prison. Here, perhaps, he felt safe since what bound him was of his own making.  He worked alone but he peopled the small space with a tribe of his friends. Here they multiplied. Minute animals made from bits of brass; taps, nuts, bolts, rings.  Off-cuts from the sawmill where he worked; faces carved from plastic, rubber, bone and even bread; the mundane made extraordinary.

I am groping towards an insight. Was it the guilt of the survivor that made his sculptures so alive? The multitude he created to replace the multitude who died are not effigies but living.  We stare at them and they stare back. Their eyes demonstrate a steely determination to exist.

So many faces shining out from the dim light of the vitrines. They should be anonymous, but they aren’t. When we look at them we don’t feel they are small and in need of protective glass. We feel their strength and their vitality. We feel a little nervous. No matter that they are made from familiar objects, a power plug, the back of a hairbrush, food, even; there is the possibility that these piercing eyes are judging us.