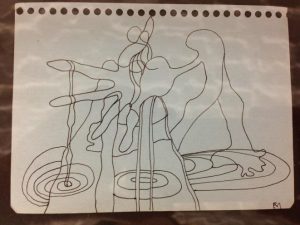 Standing beside a wall of small, fluid line drawings, was a small, elegant lady.  She hardly came up to my shoulder as we stood together and studied the little pictures.

Little is not an adequate description. Their reach could be emboldened; the line and its movement are so precise, so correct, they would stand enlargement.  However, it is their size that captivates me; images voluptuous and curvy, reminiscent of mermaids, seaweed and sea-snakes. They have been trapped, alive and bristling with detail, on paper not more than 70mm x 100mm.

I thought of the sea. There were sea-creatures with tangled locks of hair, and rocks with coiling wave crests and octopus’s arms. All was movement and gesticulation, trapped in tiny oblongs of paper. It intrigued me that surreal images of such fluency and purpose should come from the pen of  an upright, neatly contained and very polite lady. 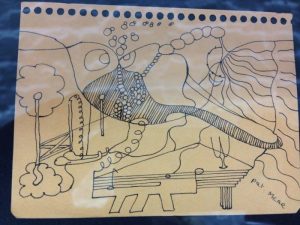 Pat Mear came to tea, bringing the drawing I had bought in person. She wore a long velvet coat, and a flowing scarf and, I think, a hat. I may be wrong, but a hat would be appropriate.

I wondered why water featured so strongly in her images.  She had spent years at sea, as a Purser and ship’s officer on the Cunard Queens. But also, far from the luxury of the New York crossing, she was on a ship breaking the ice on the St Lawrence seaway. I can see her, neat and upright in her tailored uniform, directing stewards and passengers, though some may be twice her size, with aplomb. More, she has, with wit and energy, battled the powerful leather companies to stop the slaughter of Sperm whales. She may be polite, but she has a steel core; she is a miniature gladiator.

And here she is, perched like an exotic bird on my sofa, presenting me with a packet of perhaps the most delicious biscuits I have ever eaten.

And I wondered again when I saw her large paintings – one larger than the artist herself  – abstract, flowing but solid and powerful; opening up vistas with the suggestion of figures; people, undefined but there. And I think to encompass both these forms, the miniature line drawing and large, colourful semi-abstract, takes an artist of great insight, imagination and technical skill as well as effort and perseverance.